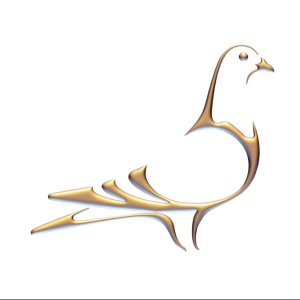 It can be argued either way: Bamboo is a building material that’s criminally underused in construction or one destined to remain a quirky, regional curio.

Long ignored beyond the developing world, bamboo (a grass, not a tree) has the compressive strength of concrete and the tensile strength of steel. Unlike those materials, it sequesters carbon as it grows instead of emitting it while it’s made. It replenishes rapidly, shooting up by as much as three feet per week. It’s hollow and lightweight. “There’s no wood that can compete with that,” says Joana Gomes of the Mexican architecture firm CO-LAB, which recently designed Luum Temple, a bamboo pavilion in Tulum, Mexico.

Generative Design for Sustainability: Reducing Impact and Optimizing Your Workflow

Beyond bamboo’s geographic specificity (it grows mostly in Central and South America and Asia), its irregular shape, thickness, and segment lengths make it difficult to mill and join together. Bamboo pieces don’t fit together neatly, which introduces challenges when creating insulated wall assemblies, a necessity outside of tropical climes.

But designers are tackling these constraints, working on systems to make bamboo behave more like wood yet still express the plant’s aesthetic properties, like its graceful segmented rhythms and aggregated textures. Harnessing bamboo’s negative carbon footprint is one way the building industry could blunt the impact of climate change, which affects the tropical developing nations where it grows. “We’re just starting to understand the potential of bamboo,” Gomes says.

Bamboo is powerfully linked to specific places and contexts: Looking at a bamboo structure, one is reminded of the roar of a rainforest downpour or flashes of tropical birds on the horizon. Bamboo can evoke reverence for faraway places, as when applied to luxury hospitality projects. But this specificity also typecasts the material less favorably. “Bamboo is associated either with lowbrow informal architecture in Asia or Central America or kitsch vacation tropes, like Gilligan’s Island,” says Katie MacDonald, an architecture professor at the University of Tennessee Knoxville who’s researching bamboo.

“To truly broaden the possibilities with bamboo, we need new and dynamic joinery systems that allow for the varying poles to be connected to each other efficiently, accommodating their irregularity,” says Elora Hardy, founder of Ibuku, a Bali-based architecture firm that specializes in bamboo, designing projects such as the stunning Bambu Indah resort using Autodesk AutoCAD. 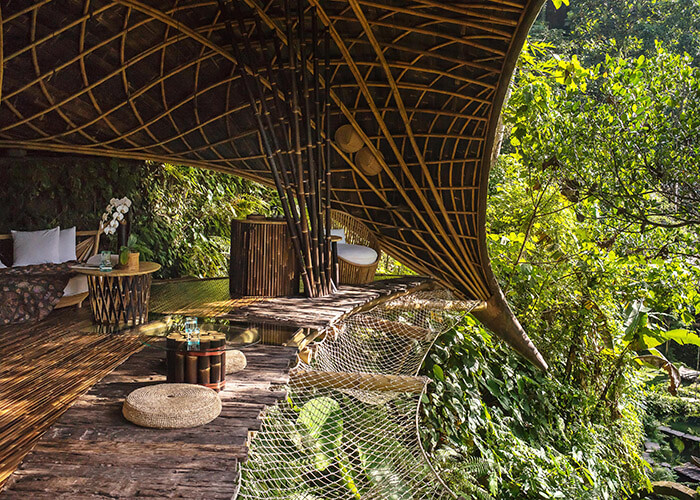 Architects have heeded this call. The American Institute of Architects gave a $30,000 Upjohn research grant to MacDonald, fellow University of Tennessee Knoxville professor Kyle Schumann, and Virginia Tech’s Jonas Hauptman to design a bamboo fabrication system promising extreme versatility in joining bamboo together. Using bamboo variants that are more solid than hollow, the team can cut lengthwise rectilinear sections. “What that allows us to do is mill flat pieces so it looks more like a timber slab,” Schumann says.

Schumann and his research partners have designed a prototype milling machine that’s similar in size to an antiquated microwave, with holes at either end where bamboo poles slide in. These poles are secured with a chuck that closes around the bamboo, “sort of like a camera aperture,” Schumann says. The machine manipulates the pole across four axes, first scanning it to map the material, then cutting it with a CNC mill into any shape. “You can subtract any geometry that you can design within the thickness of the material,” MacDonald says.

The team’s ultimate vision is a self-contained, field-operable box that could parametrically design assemblies and joinery methods on the fly, then fabricate and build them. “Whereas most digital fabrication technology is high cost and requires economies of scale, this project seeks to develop an affordable DIY machine that can leverage technology to make use of the irregularity of bamboo,” MacDonald explains. With this versatility, balloon framing of smaller buildings would seem an intuitive use. In its most pared-down version—perhaps most useful for the emerging markets where bamboo grows—the machine would offer a preset menu of joints that users can select. 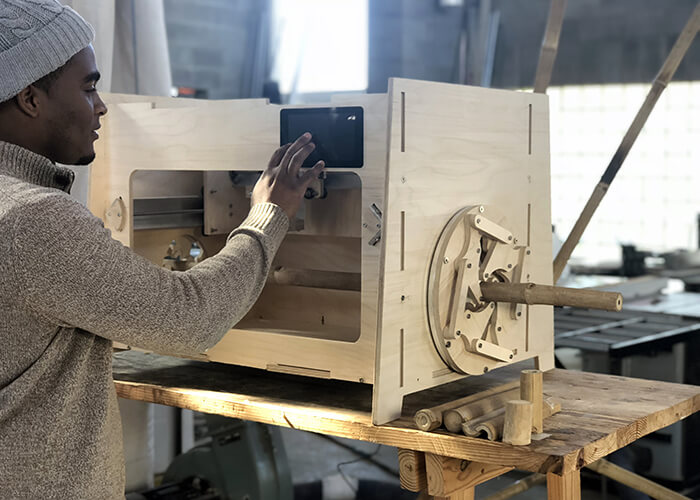 The University of Tennessee and Virginia Tech team (which used Autodesk Fusion 360 to plan parametric tool paths and model the machine prototype) is also researching structural bamboo wall panels, similar to cross-laminated timber. The team is investigating filling the gaps between milled planks of round bamboo with insulation; one approach is to let mycelium (mushrooms fungus) clog these gaps.

CO-LAB worked with bamboo that was cut into rectilinear strips but used more traditional joinery methods. Luum Temple is a centerpiece of the firm’s Luum Zama residential development, luxury real estate that sits lightly on the land and preserves much of the surrounding southern Mexican jungle. An open-air pavilion that can be reached only by foot, Luum Temple is meant to be a place for quiet meditation.

The pavilion is a monumental object and work of sculpture in its own right, coalescing around five 18-foot cantilevering catenary arches—shapes made possible by bamboo’s elastic qualities. CO-LAB and builder Arquitectura Mixta cut long sections of immature, extra-pliable bamboo and bent them into shape, joining the links with aluminum straps every few feet.

Gomes wanted to build the pavilion with a structural system that was compatible with the catenary arches. Guided by a parametric design process, CO-LAB designed the triangular motif repeated throughout the structure, giving it a strong sense of rhythmic articulation. In this peaceful space, the geometric pattern warped across catenary arcs reaches out into the jungle in rich, tactile layers, appearing to be woven from fabric rather than constructed as a building. Gomes had planned to make the pavilion out of wood, but proximity of bamboo farms and experienced builders changed that. “It created an entirely new spectrum of possibilities for us,” she says.

Another bamboo-centric project, the Sombra Verde pavilion, was designed by Carlos Bañón and Felix Raspall, architecture professors at the Singapore University of Technology and Design, and puts its fabrication technology credentials upfront. The duo (who practice as AIRLAB) designed the pavilion for Singapore’s 2018 Urban Design Festival.

Each bamboo piece in the structure was scanned to map its dimensions; an algorithm generated a plan to join the pieces together, specifying joinery nodes and required bamboo lengths. Each pole was cut to length and 36 3D-printed PLA (a plant-based polymer) joints that look a bit like cybernetic barnacles emerged from the printer bed. “Each one is different, but we give it a holistic solution,” Bañón says. The poles plug into the nodes by hand. Unlike Virginia Tech’s research, the process is a provisional way to build with bamboo that focuses its mass-customization muscle on the joints.

Once the structure was assembled, Bañón and Raspall were surprised by Sombra Verde’s strength and rigidity. “You imagine bamboo is flexible, but when you lift it, it’s solid and crazy stiff,” Bañón says.

Bamboo is well-suited to canopies or structures that need to be rapidly deployable or temporary. The pavilion was built in a day by only seven people, with no special equipment. It’s lightweight enough for four people to lift.

The next frontier for bamboo is assembling it in what Raspall calls “kinetic umbrella” applications—assemblies that move and change shape. Today’s task for bamboo research is locking elements in place; tomorrow’s agenda is joining assemblies together with the dynamic movement and flexibility inherent in the material’s properties.

Autodesk – Use Teams to Assign Certain Software to Certain Users 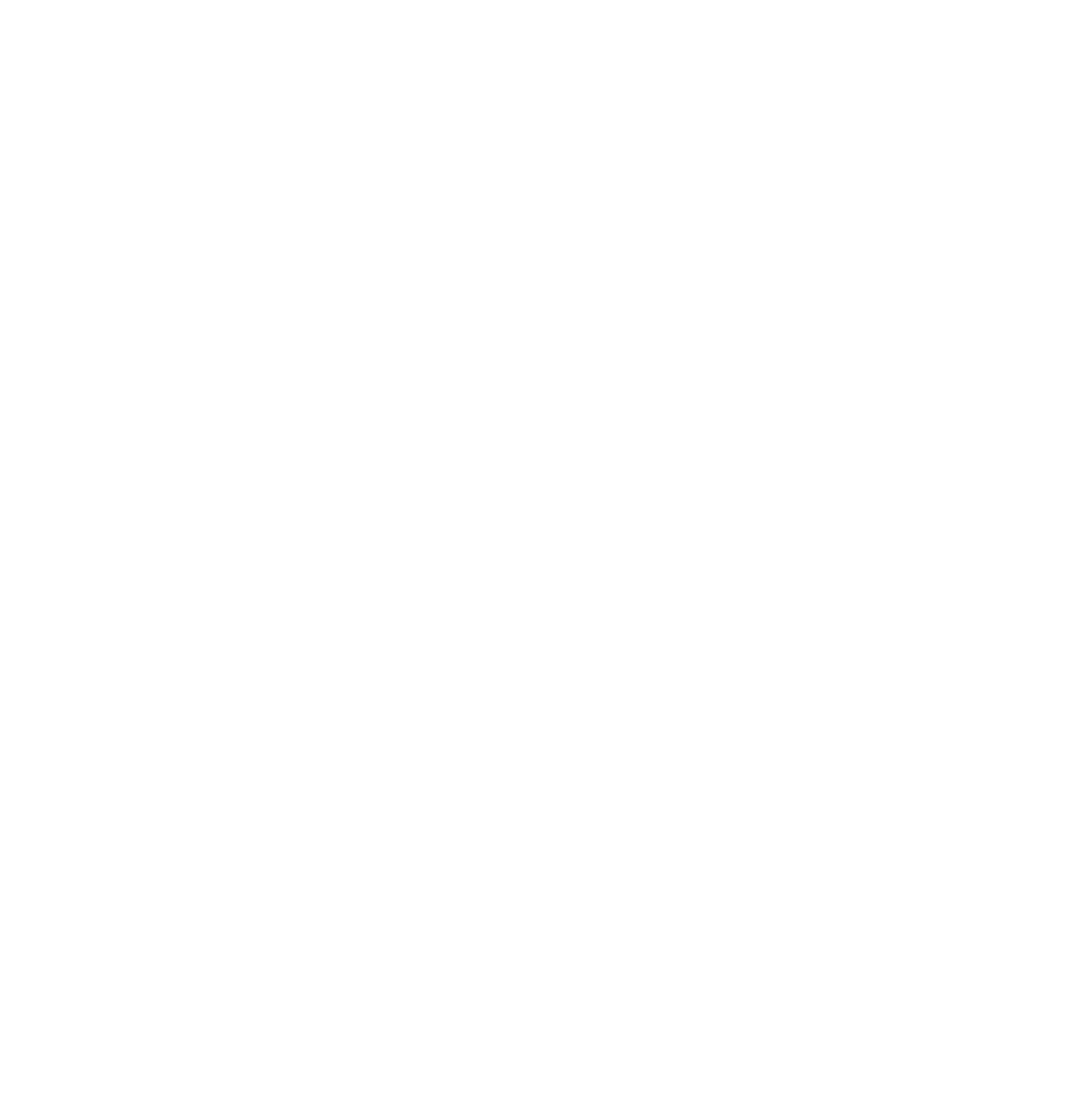